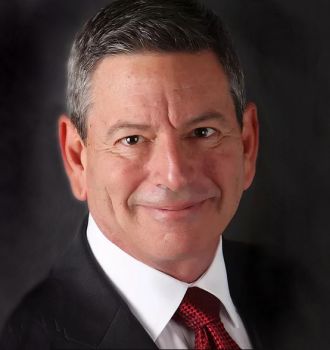 I have been handling personal injury, family law, and commercial litigation in South Florida for over 35 years. Born and raised in New York, I attended Ramapo High School in Spring Valley and went on to study at the State University of New York at Binghamton where I majored in Political Science, graduating in 1977. After a brief time working in sales, I moved from Manhattan to Miami to attend the University of Miami School of Law. While attending law school, I served as both a law clerk and bailiff in the 11th Judicial Circuit of Miami-Dade County for Judge Francis X. Knuck. I received my Juris Doctorate in 1985.

​After graduation, I worked as an associate attorney handling plaintiffs' personal injury and medical malpractice cases. I joined Marks, Aronovitz & Leinoff, P.A. in 1986 and expanded my practice to include commercial litigation and matrimonial law. The firm became known as Aronovitz & Jacobs, P.A.

"When you call my office, I'll be the one to answer the phone and listen to your story."

​I founded Jacobs and Straus P.A. with my wife, Geri Sue Straus (1960-2013) who was also a University of Miami School of Law graduate. Susie and I handled and tried a large number of personal injury cases over the years, including automobile injury, motorcycle accidents and ATV accidents, wrongful/accidental deaths, and insurance bad faith. We also had a strong Family Law and Commercial Litigation practice. We gave each and every client the legal expertise and personal attention necessary to achieve the best possible outcome.

​I bring my vast experiences to my new practice, Law Office of Paul Jacobs, P.A., where I practice in Personal Injury, Family law, and Commercial Litigation. As a long time Boca Raton resident, I have spent many years coaching Boca youth league sports. I served as the president of the Boca Tierra Homeowners association from 1991-2014. I have served on the Board of Directors of the Levis JCC and continue to support the Jewish Federation of South Palm Beach County. My family and I are longtime members of Temple Beth El in Boca Raton.